After a close call, Dorothy and Lucas learn the Wizard has sent his guards to kill her. In Emerald City, the Wizard seeks advisement from his counsel as he begins to lose control and the witches begin to show their power. Meanwhile, Tip and Jack venture to the City of Ev to find a cure following a life-changing revelation.[1]

Dorothy wakes up a sound of gunfire and finds Lucas gone, but his sword still there. Toto leads her to the seaside, where Lucas apparently tried out the weapon. He believes Dorothy with the gun is far more terrifying than any swordsman in Oz. They hear a lion road in the distance.

The circus of Oz passes by and they both catch a ride. On the road, the troupe passes the Keep of the Mistress of the East, a castle with a tornado cloud just above it. One of the circus members explains that the weather mourns East’s death.

The troupe encounters Eammon and other guards. They search for Dorothy. Lucas wants to hide, but Dorothy believes the soldiers can take her to the Wizard. She’s willing to part ways with Lucas. But he overhears the soldiers’ true intention - to kill Dorothy - and convinces her to run.

Dorothy decides to go to East’s castle. She believes that since tornado brought her to Oz, a tornado can take her back. Lucas thinks it’s suicide but still tags along. As they reach the castle, Dorothy opens up about her parents, who told her she was adopted when she was 12. She says that on the day she finally wanted to meet her real mother, she was transported to Oz. Lucas reminds her she cannot simply control a tornado and it may kill her. Dorothy replies she’d rather die trying than ever get a chance to see her mother again.

At the entrance to the castle, they meet a guardian, Sullivan. He accuses them of coming to loot and steal and says he need to take their lives in his Mistress’ stead. When both him and Lucas draw swords, Dorothy steps in and ruby gauntlets appear on her hands. Sullivan recognises them and calls them Elements, taking Dorothy for East’s apprentice and his new Mistress.

Sullivan admits he heard rumours about an apprentice and Dorothy quickly assures it was her. She lies that East pass peacefully and orders to be taken to the cyclone. Sullivan agrees, thinking she’s here to settle the weather. He leads Dorothy to her chambers so that she can be purified before the ceremony and orders Lucas to forfeit his sword, which he does reluctantly.

Dorothy dresses up, ready to enter the cyclone. It appears that there’s a lake in the weather chamber, populated with ‘Sharpness’, a serpent like monster. Dorothy uses the elements to walk on water and then reaches up for the tornado - it takes her away, leaving Lucas and Sullivan behind.

Dorothy finds herself in a mysterious, wintery place, with objects from our world scattered around her. She picks up a lab coat with the name ‘Chapman’ written on it, surprised and shocked.

Dorothy returns with the tornado, but the weather is not settled. She brings back the lab coat with her birth mother’s name on it. Sullivan guesses Dorothy is not really an acolyte of East, but an interloper. He admits the coat belonged to another interloper, a woman who was brought to the castle by the Wizard to send back. Dorothy admits that the interloper in question was her mother. Sullivan tries to kill Dorothy and Lucas intervenes, buying her time to escape. She stops, however, because Sullivan threatens to slice Lucas’ throat. Dorothy convinces him to let them both go, saying that East killed herself and there never was an acolyte. Sullivan lets Lucas go and resigns to his fate, to perish along with the castle.

Dorothy and Lucas escape, as the castle’s main tower is consumed by a tornado. Dorothy decides that if the wizard pulled her mother to Oz, he has all the answers she needs.

Later, Eammon and other guards arrive at the castle and find a prescription bottle with 'Dorothy Gale' written on it.

Tip is depressed, but doesn’t want to go back home. Jack proposes going to Ev, a technologically advanced kingdom, and search for medicine there.

In Ev, Tip finds it difficult to cope with the change. He feels he’s wearing somebody else’s skin. Even such basic things as proper dress and using bathroom is problematic.

Jack and Tip find an apothecary and want the medicine recreated. It turns out, the medicine was a black elixir, suppressing Tip’s true nature. Tip is and has been alway a girl. She’s crushed by the revelation.

Jack finds Tip at a balcony, high above ground. She’s crying and he tries to console her. He says that everything will be all right, but she won’t hear any of it. He show her the dagger he stole from Mombi and says they can sell the emeralds and live however they like.

Feeling drawn to her, Jack suddenly kisses Tip and she pushes him away. As he clumsily tries to explain himself, Tip is furious and pushes him harder, making him break the railing and fall few stories down, to the courtyard.

The Wizard in the Emerald City

Three women appear to have flown to the bend knee of the Eternal Warrior and are now doing a ritual there. The Wizard is summoned to watch and Anna explains that it’s a ritual for suicide - in truth, the three women jump and hang in the air by their necks, dead. People run in terror.

At his castle, the Wizard wants to know what is going on. Elizabeth, his most trusted Councilwoman, suggests it’s another sign for the coming of Beast Forever. As are circles in the fields appearing in the West. Similar things happened in 1378, when the Beast appeared as fire. The Beast is now supposed to come when the two moons become one, which happens in eight days.

Anna, the newest Councilwoman, thinks Elizabeth is wrong. She believes the patterns in the fields appear because the weather is in chaos after East’s death and that it will snow in the evening, even though it’s Summer season. She also identifies the three suicide victims as West’s brothel girls.

The Wizard and Anna go to confront West. West is mean to Anna, revealing her mother used to work in the brothel and conceived her there. She also implies the Wizard had sex with Anna’s mother, but is not her father. Anna runs off.

The Wizard finds and consoles her. He tells her his name is Frank Morgan and that he was born a man, before he was a wizard. He convinces her that neither past nor her mother defines her. Anna asks what her mother looked like, the Wizard admits he doesn’t remember.

West admits she is happy to give up magic, because she’s still suffering after feeling useless when the Beast Forever came.

Anna investigates the suicide further and talks with other brothel girls. The only thing that links all three is that they all served men with erectile dysfunction. Later, Anna informs the Wizard that Elizabeth was wrong, not about the time, but about the manner in which the Beast will come. It will not be fire, but something far worse.

Anna admits to the Wizard that she knows he never controlled the giants and their power is probably locked inside the Prison of the Abject, which is why the Wizard needs it opened. She promises she won’t tell anyone this, not even Glinda. The Wizard has her locked in a cell.

Later, when Elizabeth urges the Wizard to wake his sleeping giants to save Oz from impending doom, snow begins to fall 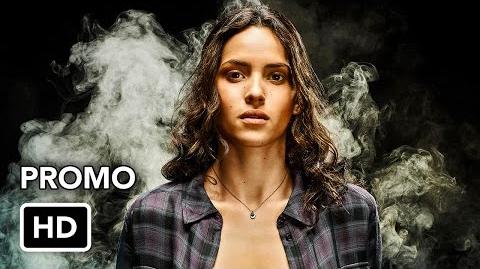 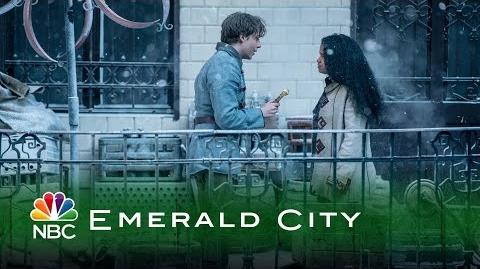 Retrieved from "https://emeraldcity.fandom.com/wiki/Mistress_-_New_-_Mistress?oldid=6118"
Community content is available under CC-BY-SA unless otherwise noted.