"Science and Magic" is the fourth episode of Emerald City. It aired on January 20, 2017.

Dorothy and Lucas are approached by a mysterious young girl who has lost her way. Following a tragic accident, Tip finds herself caught between two powerful forces - Glinda and West. Elsewhere, the Wizard pays a visit to a village and exacts his authority over its citizens. Meanwhile, Jack has a life-changing experience that leads him on a surprising new path with a unique woman.[1]

"So, the only choice I have in this life as a girl is to become either a nun or a whore?"
—Tip

Tip contemplates committing suicide after what he did to Jack. He’s stopped by an Ev dragoon and taken to an orphanage for young girls run by Glinda.

There, he’s approached by Glinda who just arrived to take chosen girls with her to teach further. West also arrives and, loving Tip’s gumption, wishes to offer her a second choice: becoming a girl in her brothel.

She even disguises herself as one of the girls to convince Tip, but Tip sees through this. Nevertheless, he’s intrigued by the magic West possesses.

In the end, Glinda leaves with a squadron of girls and Tip stays behind with West.

Jack wakes up to find a strange woman tending to him. Her name is Jane and she’s a woman of science, an inventor and Ev military contractor. As Jack has been badly hurt in the fall, she rebuilt him - he now has steel heart, left arm and two legs.

Jack is heartbroken for Tip and sees no sense in being brought back. He then meets a mysterious masked lady, who teases him as a fellow freek.

But when Jane finally brings Jack to meet her employers, the royal family of Ev, the mysterious woman turns out to be the princess Langwidere - and she now owns Jack.

The Wizard and Anna

The Wizard’s Guard is cleaning up the site of Nimbo massacre with the surviving townspeople watching. They come across a magical tunnel.

The Wizard rushes to investigate it. He leaves behind Elizabeth and takes Anna, whom he releases from her cell. Anna admits to have further studied the coming of the Beast and that this time, the Beast would be much different.

In Nimbo, people still believe in magic being good and helpfull.

When Anna investigates the tunnel, it blows up, rendering her unconscious. The Wizard understands how much he cares for her and is relieved when she wakes up.

By threatening his grandchild, the Wizard convinces the most senior Nimbo citizen to address the remaining townspeople and tell they should put their faith in science.

Dorothy and Lucas travel through the woods towards Emerald City, trying to keep away from the Brick Road. Suddenly, they’re approached by a little girl who immediately clings to Lucas. The girl does not talk at all, but apparently wishes to stay close to Lucas.

Dorothy decides to stop trying to reach the Wizard and make sure the girl gets back home. And despite protests from Lucas. Dorothy takes the girl to a nearby village. It turns out the girl has earplugs that isolate her from the sounds of the world.

In the village, initially nobody claims the child, but eventually an odd couple appears and says the girl is theirs and name her 'Silvie'. However, Silvie doesn’t act as if she knows them, so Dorothy follows them to see their house. When the house lacks Silvie’s bedroom, Dorothy wants to intervene. This is the moment that Eammon and the rest of the Guard arrive and Dorothy needs to hide.

Not wanting to leave the child behind, Dorothy borrows Lucas’ coat, disguises herself and goes to retrieve Silvie. She finds the odd couple turned to stone and Silvie in a trance between them. Dorothy calms the child, but is cornered by Eammon on the way out of the village.

As Eammon wants to execute Dorothy for murdering East, he notices the sword that belongs to Lucas. Distracted, he admits he knew the owner of the sword and asks where he is. Dorothy uses the situation and fires the gun in the air, causing people to panic. Lucas appears and carries Silvie away, but Eammon recognizes him and calls him ‘Roan’. When Eammon keeps following her, Dorothy shots him in the shoulder.

Later, when Silvie is asleep, Dorothy and Lucas discuss her powers of turning people into stone. Dorothy decides to show Lucas some of the science and magic of her world. She presents him with her iPhone and plays 'Ain't No Sunshine' by Bill Withers for him. Initially shocked, Lucas quickly starts to admire the wonders of Dorothy's world. Taken by the moment, the two kiss.

In the morning, they are woken up by the sound of horses. Lucas orders Dorothy to run and takes Silvie, when he's cut off by a wounded Eammon. Dorothy sprints through the woods but is suddenly knocked out by a wooden projectile - a weapon thrown by Ojo. 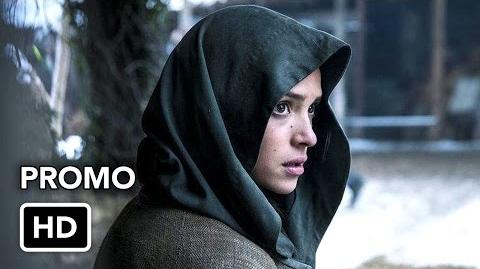 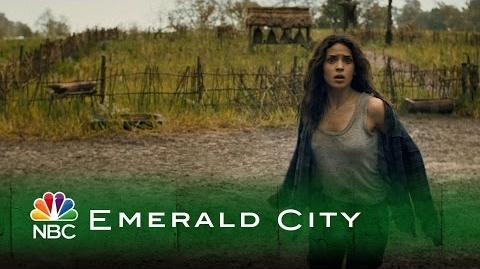 Retrieved from "https://emeraldcity.fandom.com/wiki/Science_and_Magic?oldid=5159"
Community content is available under CC-BY-SA unless otherwise noted.